Marie Geneva Doud was born on November 14, 1896 in Boone, Iowa, to  John Sheldon Doud, a prosperous meat packer, and Elivera Mathilda Carlson. Nicknamed Mamie, she grew up in relative comfort in Cedar Rapids, Iowa, Colorado Springs, Colorado, Denver, Colorado, and the Doud winter home in San Antonio, Texas. Her father retired at age 36 after making a fortune in the meatpacking industry. She and her three sisters grew up in large homes with several servants.

It was soon after completing her education at Miss Wolcott's finishing school that she met Dwight Eisenhower at San Antonio in October 1915. Introduced by Mrs. Lulu Harris, wife of a fellow officer at Fort Sam Houston, the two hit it off at once, as Eisenhower, officer of the day, invited Miss Doud to accompany him on his rounds. On St. Valentine's Day in 1916 he gave her a miniature of his West Point class ring to seal a formal engagement.


Lieutenant Dwight D. Eisenhower, aged 25, married Mamie Doud, aged 19, on July 1, 1916, at the home of the bride's parents in Denver, Colorado. Following the wedding, performed by Reverend Williamson of the Central Presbyterian Church in Denver, the newlyweds honeymooned a couple days at Eldorado Springs, Colorado a resort near Denver, and then visited the groom's parents in Abilene before settling into the lieutenant's crude living quarters at Fort Sam Houston.


For years, Mamie Eisenhower's life followed the pattern of other Army wives: a succession of posts in the United States, in the Panama Canal Zone; duty in France, in the Philippines. Although accustomed to more creature comforts than those afforded at military posts, Mamie adjusted readily and joined her husband in moving 28 times before their retirement at the end of his term as president.


Mamie Eisenhower, with her husband, Dwight, on the steps of St. Mary's College, San Antonio, Texas, in 1916


During the Second World War, while promotion and fame came to "Ike," his wife lived in Washington, D.C. After he became president of Columbia University in 1948, the Eisenhowers purchased a farm (now the Eisenhower National Historic Site) at Gettysburg, Pennsylvania. It was the first home they had ever owned. His duties as commander of North Atlantic Treaty Organization forces—and hers as his hostess at a villa near Paris—delayed work on their dream home, finally completed in 1955. 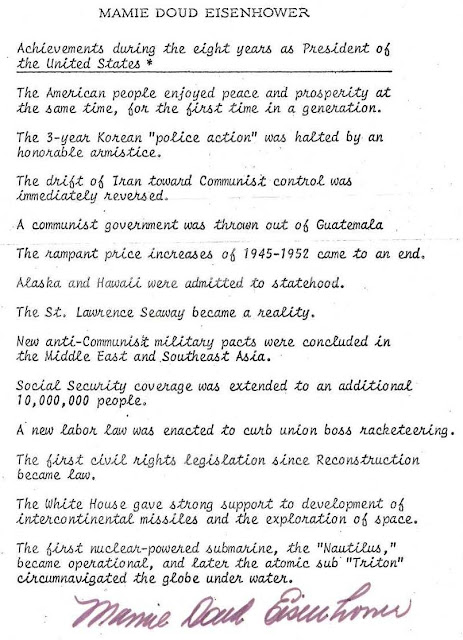 They celebrated with a housewarming picnic for the staff from their last temporary quarters: the White House. Diplomacy—and air travel—in the postwar world brought changes in their official hospitality. The Eisenhowers entertained an unprecedented number of heads of state and leaders of foreign governments. As First Lady, her outgoing manner, her feminine love of pretty clothes, some of them designed by Scaasi, jewelry, and her obvious pride in husband and home made her a very popular First Lady. The gown she wore to her husband's inauguration is one of the most popular in the Smithsonian National Museum of American History's collection of inaugural gowns.

As First Lady, she was a gracious hostess but carefully guarded her privacy. A victim of Meniere's disease, an inner-ear disorder that affects equilibrium, Mrs. Eisenhower was uneasy on her feet, a spectacle that fed baseless rumors that she had a drinking problem.

Mrs. Eisenhower was known as a penny pincher who clipped coupons for the White House staff. Her recipe for "Mamie's million dollar fudge" was reproduced by housewives all over the country after it was printed in many publications.

As described in multiple biographies, including Upstairs at the White House by J. B. West, Mrs. Eisenhower was reportedly unhappy with the idea of John F. Kennedy coming into office following her husband's term. Despite new First Lady Jacqueline Kennedy having given birth to her son John Jr. viacaesarean section two weeks prior, Mamie refused to inform Jackie that there was a wheelchair available for her to use while showing Mrs. Kennedy the various sections of the White House. Seeing Mamie's displeasure during the tour, Jackie kept her composure while in Mrs. Eisenhower's presence, finally collapsing in private once the new First Lady returned home. When Mamie Eisenhower was later questioned as to why she would do such a thing, the former First Lady simply stated, "Because she never asked." 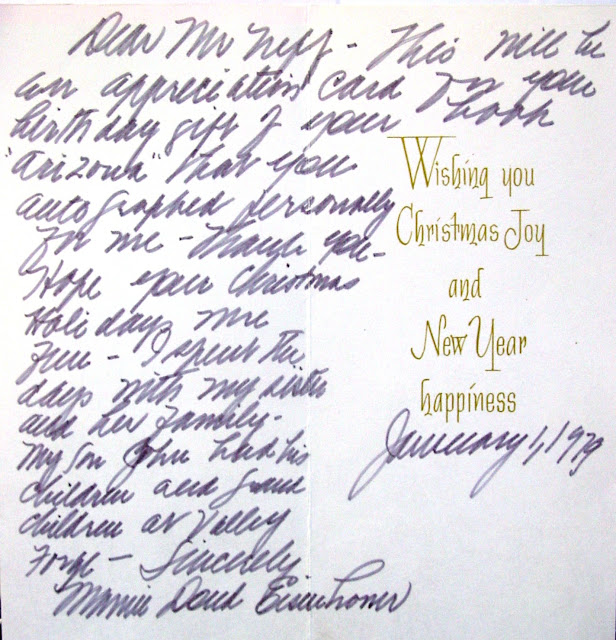 In 1961 Mrs. Eisenhower retired with the former president to Gettysburg, Pennsylvania, their first permanent home. After her husband's death in 1969, she continued to live full time on the farm until she took an apartment in Washington, D.C. in the late 1970s.  She suffered a stroke on September 25, 1979 and was rushed to Walter Reed Hospital, where Ike had died a decade before. Mamie didn't leave the hospital and on October 31, announced to her granddaughter, Mary, that she would die the next day. Indeed, she died quietly in her sleep very early the morning of November 1, just a few weeks shy of her 83rd birthday.

The Congressional Evolution of the United States of America

Presidents of the United States of America

Capitals of the United Colonies and States of America

Book a primary source exhibit and a professional speaker for your next event by contacting Historic.us today. Our Clients include many Fortune 500 companies, associations, non-profits, colleges, universities, national conventions, PR and advertising agencies. As a leading national exhibitor of primary sources, many of our clients have benefited from our historic displays that are designed to entertain and educate your target audience. Contact us to learn how you can join our "roster" of satisfied clientele today!

Primary Source exhibits are available for display in your community. The costs range from $1,000 to $35,000 depending on length of time on loan and the rarity of artifacts chosen.

No Taxation Without Representation

US Bill of Rights

*** President of the Confederate States of America